Bust through Bowser’s headquarters, full of enemies and obstructions.

Concept and theme:
I wanted to make a difficult (but not kaizo) platformer course themed after SMB1’s castle levels. This one was really fun to create because I wanted to make it a really big level but keep it linear and only one floor. Designing it this way makes everything visible and allows each progressing challenge to have an obvious solution. The only difficult part is the execution.

Continuing with the Bowser theme series, this course is meant to feel like Mario has infiltrated the enemy base, and all of Bowser’s minions are trying to stop Mario from going deeper. After reaching 6 floors down, Mario gets to kill Bowser and destroy the base.

Thoughts:
This is one of those levels where I don’t believe seeing the solution ruins the experience because the challenge itself is getting through the whole level. To me, it is a well-balanced mix of fun and difficulty, and I myself still enjoy playing the course from time to time.

Bowser’s War Tanks
What was it like for you when you were learning to build on Mario Maker? 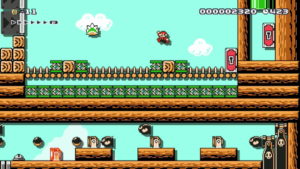 Maneuver across and through Bowser’s army of tanks, full of obstacles and traps. As you progress further, more enemies try to stop you.

Concept and theme:
This level was inspired mostly by the traditional platforming style of SMB3, particularly the tanks designs, with the added flair of going inside certain tanks to progress through the level. The various choices are also intended to give the effect of choosing alternate routes throughout the platoon’s “architecture.”

Thoughts:
This was one of my earliest stages, and I remember sitting down with the SMB3 blank slate, wondering what I should make. I drew the first tank, and it looked awesome to me. So I started progressing the level with gradually bigger vehicles and more weapons. That looked too similar to SMB3 and felt a little overdone, so I decided to make an underground, which represented going inside the tanks. That seemed kind of cool, and because there were a lot of tanks in the environment, I designed the underground to have mini choices for Mario to decide how to maneuver through Bowser’s army.

Just a slight tidbit: I wanted the very first room to feel as if you were already inside a chamber. Since nothing really happens there, my hope is the player is led to feel like the level doesn’t really start until Mario exits the pipe, which isn’t very typical because, by game-design, that means the outdoor tanks area is actually the “sub-world.”

Overall, this is a typical, fun platformer that is only moderately difficult and is generally pretty simple to figure out. My hope is that it has good replay value, especially with the many combinations of pathways to choose from.